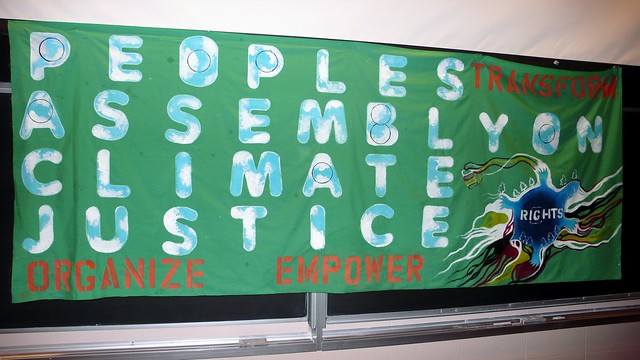 A quick thank you to everyone who came out for the 2nd Toronto People’s Assembly on Climate Justice.  We had nearly 200 participants through the day and formed seven People’s Council’s on topics ranging from Movement Building to Mass Action to Personal Development.  Some very exciting decisions to be made as we figure out how to best move forward into the next Assembly.

We will be working on collecting together the various notes from the breakouts and make them available to you in the near future.  If you were one of the notetakers – please type and send your notes as soon as you can to peoplesassembly.toronto@gmail.com.

Be in touch soon,

On June 23rd 2010, in advance of the G20, Toronto held its first People’s Assembly in community response to the climate crisis. Now on December 4th, 2010, activists, groups, community organizers and neighbourhood participants will gather for the second Toronto People’s Assembly on Climate Justice.

Faced with the illegitimate and false solutions promoted through the UN climate talks, La Via Campesina has called for the creation of a thousand Cancuns to counter the next round of negotiations in Mexico from Nov. 29th to Dec. 11th. For Dec. 4th, the Global Climate Campaign has initiated an international day of action, and the national call-out by the Council of Canadians to hold countrywide assemblies on the same day has been answered by communities across Canada. The second Assembly, as a manifestation of these calls to resistance, will serve as the launching point for a series of regular Assemblies in an effort to build a united movement for Climate Justice in Toronto.

The challenge of the climate crisis can only be met with a coordinated response that will bring forth our power in numbers. It also requires that we confront the root causes of the crisis and not just the symptoms. Through a horizontal people’s process, the Assembly will seek to create a space where we can work together to share experience, knowledge, and resources in order to build a local response to a global crisis. The Assembly hopes to work towards this objective through channels of collective dialogue and community empowerment.

Our goal is to generate new possibilities and new hopes in order to bridge the gap from separately operating groups, communities, and individuals, to converge into one diverse, united movement. We must equip ourselves with the tools we need to fulfill our potential as an effective Social and Climate Justice community.

See links below for sponsors and endorsers.