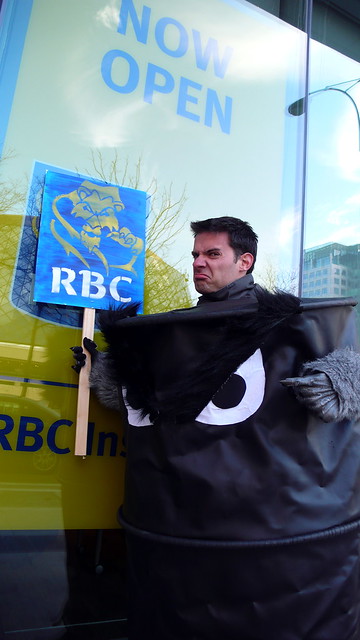 Since 2007 RBC has backed more than $16.7 billion (USD) in loans to companies operating in the tar sands—more than any other bank. Expansion of the tar sands is trampling the rights of Indigenous peoples, destroying globally significant ecosystems and significantly increasing Canada’s carbon emissions.

Representatives from several First Nations impacted by tar sands expansion attended the meeting and demanded that: RBC recognize their right to Free, Prior and Informed Consent for Indigenous communities; and that all financial support for tar sands expansion be suspended.

Featured in the first video (Part 1):

Featured in the second video (Part 2):

ecoSanity (now climateye) was honoured to shoot pics and video in support of indigenous struggle at this essential protest to pressure the Royal Bank of Canada (RBC) to phase out billions in negligent tar sands financing — FAST.

Check out this incredible call out of RBC CEO, Gord Nixon, by Lionel Lepine of the Athabasca Chipewyan First Nation at last year’s RBC AGM, Feb. 26, 2009: