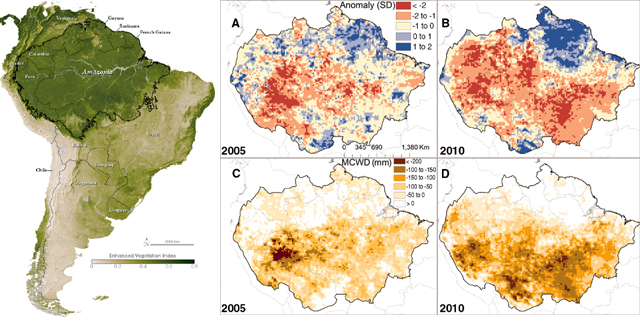 In 2005, the world’s largest, most species-rich and biodiverse rainforest, the Amazon (also called Amazonia), suffered what was described as a once-in-a-100-year drought.

Instead of absorbing 2 billion tonnes of carbon dioxide (global heating greenhouse gas) from the atmosphere each year, the rainforest is estimated to have *released* 5 billion tonnes.

By comparison, the U.S. is responsible for about 5.4 billion tonnes per year, or about 25% of annual global carbon emissions from fossil fuel use.

In 2010, only 5 years later, it happened again, but this time on a much larger, more severe scale that unleashed 8 billion tonnes of CO2.

Meanwhile, deforestation from the unsustainable practices of the timber industry, cattle ranching and soya farming has already destroyed 20% of the area that had existed a few decades ago.

This trend is consistent with the projected impacts of global warming (heating) and climate change (breakdown/disruption/destabilization).  By 2025 (or sooner), the Amazon could tip into an overall carbon emitter and dramatic accelerator of global climate breakdown, rather than the essential carbon sponge, storehouse (80-120 billion tonnes) and regulator it has long been.

Often referred to as the lungs of our world, the Amazon represents over half of all rainforests that remain.  It is home to 21 million people and 25% of all known land species.  An irreversible 20-40% die-off may already be unavoidable.  Pessimistic models suggest 50% could be lost to large, savannah-like areas by 2030 and that up to 85% could be destroyed this century.